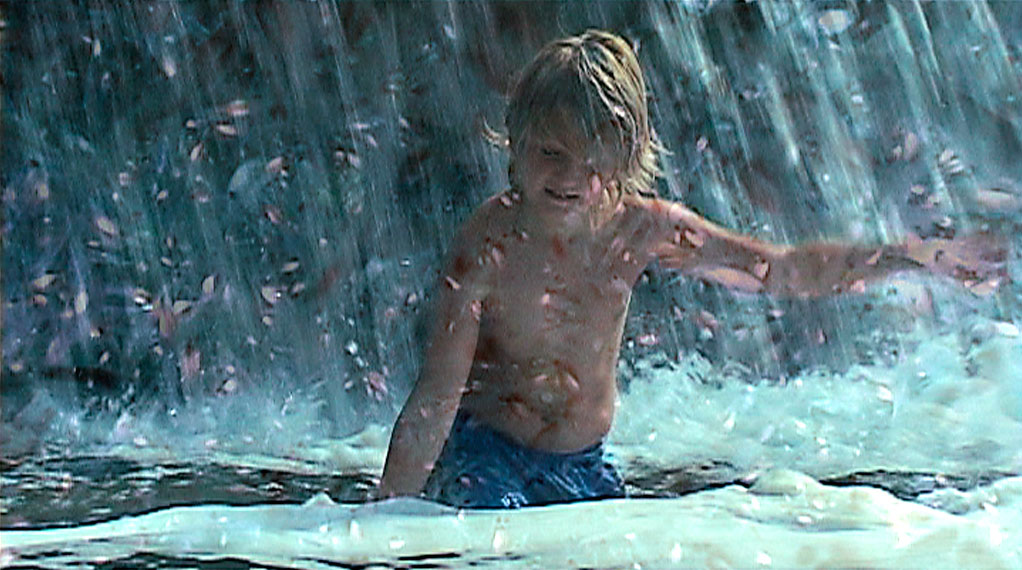 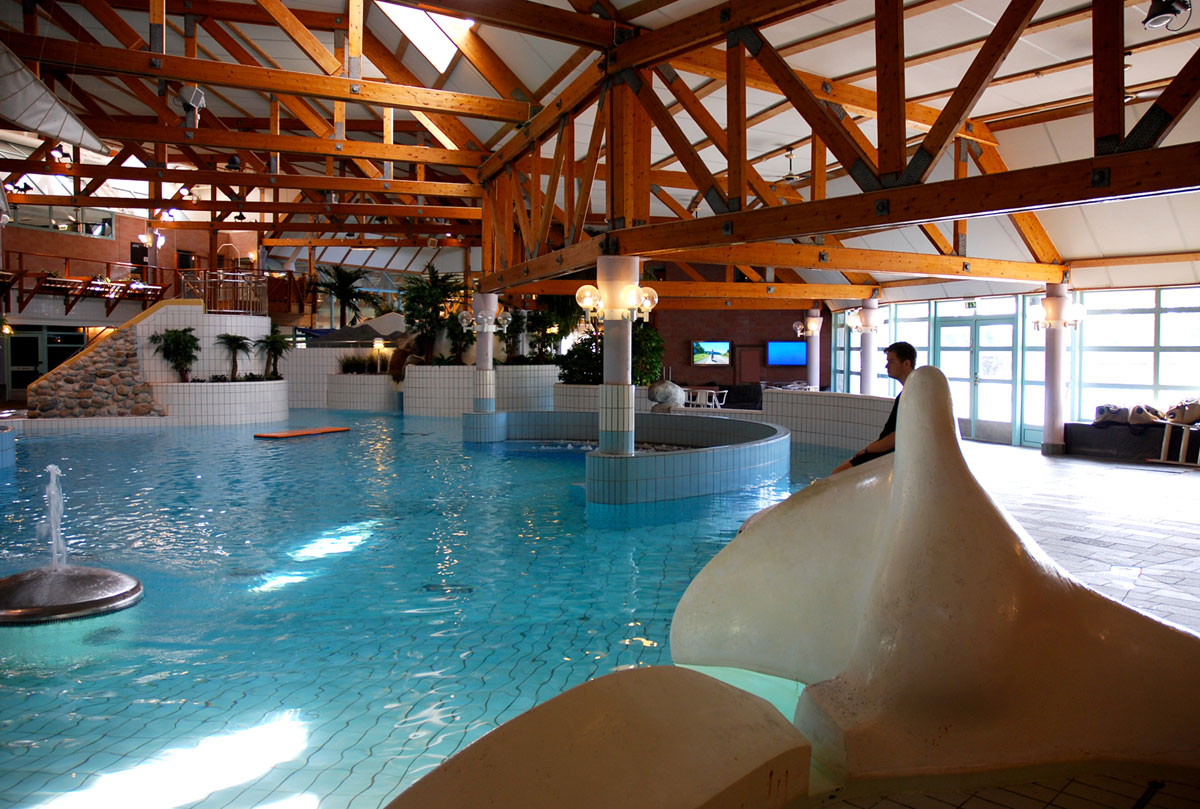 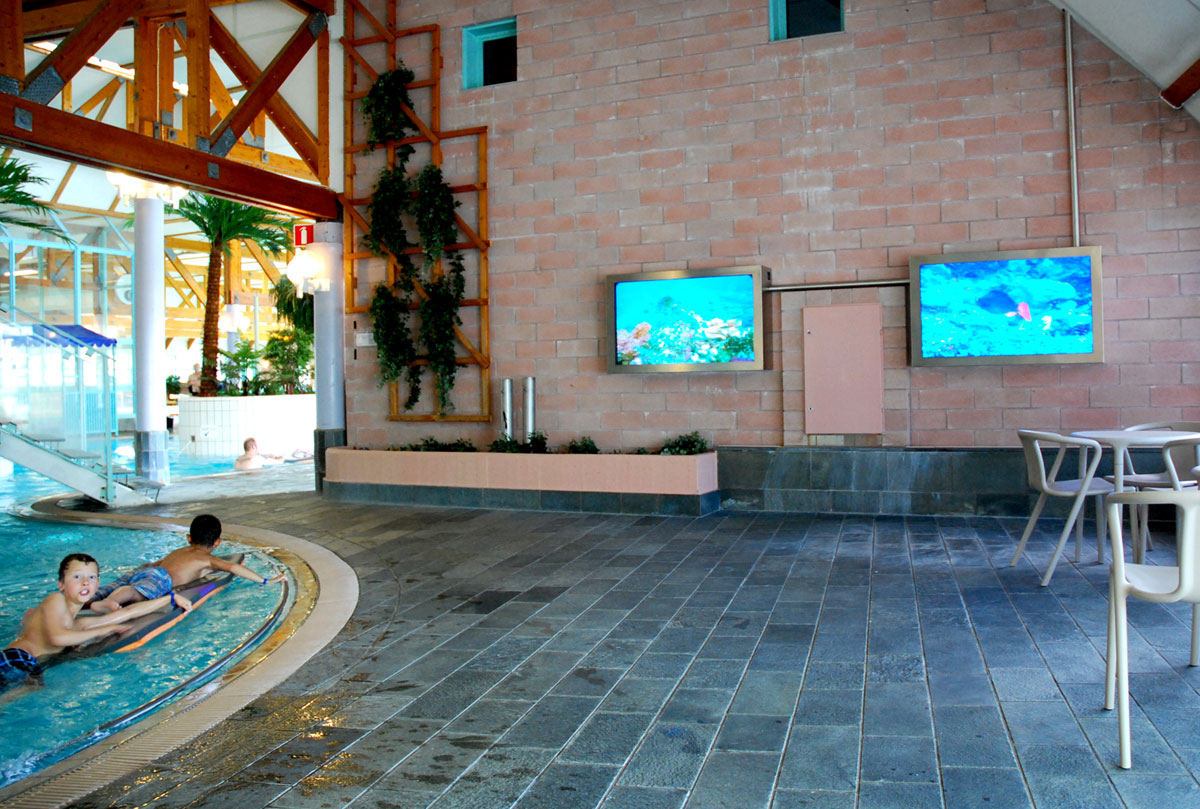 » See an excerpt of the the two screens together.

A permanent video installation placed in Storsjöbadet (public baths) in Östersund, Sweden. The opening was 2008, a commission for Statens konstråd (Public Art Agency Sweden) in cooperation with the municipality of Östersund.

Seven Waters is a fairy-tale with a boy moving stones between seven waters to make his mother come back. A wise man is giving him advice.

There is no sound in this video. I also had to make this video installation friendly, so the children did not get scared of water.

Seven Waters is a cinematic story about a boy who is looking for his mummy and has to pass through seven waters and gather seven different stones in quest of his goal. The boy meets a wise man who shows him the way, and to succeed he has to accomplish many hazardous tasks. His journey through different phases takes the viewer from one place to the other through the wilderness of the county of Jämtland, diving through seven underwater passages with different atmospheres, fish, colours and plants, as the boy collects his stones.

The film is looped and shown on two screens, where the parallel and alternate scenes show the boy’s journey among friends and foes. The stories on the screens are connected; when, for instance, the boy dives into the water on one screen and emerges on the other. The video work has no soundtrack, and has the appearance of two animated paintings mounted as large matching aquariums on a wall at the Storsjö swimming baths in Östersund. Visitors to the swimming baths are encouraged to imagine their own story and sounds, and the work can be regarded either as a fragment of a voyage or as a traditionally structured tale.

Gunilla Leander was inspired by a Sami legend about a boy who had to collect seven different kinds of water to make good things happen. In Seven Waters Leander also faces the viewer with enigmatic episodes with elements taken from the absurd and fantastical world of Alice in Wonderland. The film is dotted with subtle, uncontrolled elements, including aggressive people who chase the boy away, and an omnivorous octopus swimming the opposite direction through the shoal of fish.

Seven Waters reflects both an outer and inner voyage that the boy must undertake. A quest, excitement, challenges, adventures, strivings and maturing are phases that we all experience when we try to make our dreams come true. Seven Waters sets the imagination spinning, regardless of age, and can give visitors to the swimming baths an experience of water as something magical and fascinating.
Kirse Junge-Stevnsborg

Cooperation
Many thanks to Sharp
Their professional 52” LCD-monitors are used in Seven Waters.